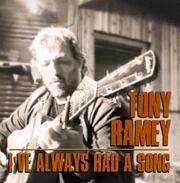 If you haven't met Tony Ramey, you really need to change that!  He is extremely dedicated to his craft of songwriting as he has hits and Gold records with credits for a number of Nashville artist’s such as Doug Stone, George Strait, John Michael Montgomery, Trisha Yearwood, and many more.  Ramey has also written hit songs for a plethora of Texas singers such as names like Aaron Watson, Willie Nelson, Jon Wolfe, and Johnny Lee.  He also penned one of my all time favorite hits sung by Miranda Lambert called Scars.

He is currently on tour in Texas with his home base out of Greenville.  His album’s storytelling and organic arrangements are present throughout the entire collection of songs on the new album.  Ramey’s Everything I Am is a classic and the perfect wedding song.  Runway With Me is my personal favorite and stands out as Ramey’s sound is unique.  This track displays a depth in skill and emotion few other current popular artists can achieve.  The songs are a collaboration of those small-town anthems and real world situations we all face.

Ramey was recently named “New Artist of the Year” in 2019 by the CMA of Texas and has the award for 2018 New Song of the Year: "Ain't Getin' Anywhere” by the Texas Country Music Awards.

Ramey is someone who's definitely paid his dues in the world of Country Music and it is his time to shine.  Click here to download the album, I’ve Always Had a Song- you won’t be disappointed!